As most of my readers know, it rained and rained in central Missouri, and that led to many floods. Here in Cape, the river crested Saturday at 45.99 feet. This is a few feet below the prediction and below the historical crests in 1993 and 2016. Still, here are some photos I took around town on Saturday morning. They’ll give you a sense of what we saw here — and also why we’re very grateful for our flood wall. My home, my part of town, and the university are all on high ground, so I’m safe from the waters. But as a river watcher, I watch these floods and always worry for all the others. 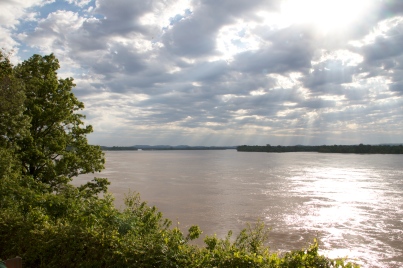 The view from the water treatment plant in Cape Girardeau. This is looking south from a point north of downtown.

Looking at an area just north of where the floodwall ends.

A closer look at the Emerson Memorial Bridge.

Looking over our historic downtown toward the bridge.

Peaking under the bridge, looking southward. In low water, there are sandbars out there.

The Southeast Missourian has some great photos and videos of the flood, and I’ve also posted photos on Twitter (@ljh1969).

In other parts of Missouri, the flooding caused catastrophic amounts of damage in small towns. Both Doniphan and Van Buren, Missouri, for example, sustained a tremendous amount of damage as huge amounts of water careened down the Current River. Ky3 also posted this drone footage of the damage along the Current River in Carter County. Meanwhile, the St. Louis area also suffered from high water. Here are some photos from the CBS St. Louis. As in 2016, the Meramec River was over its banks. The best coverage of that part of the flood, hands down, cam from the St. Louis Post-Dispatch.

As Weather.com explains, waters rose to well above record levels there and in other parts of central Missouri. Record breaking rainfalls were largely to blame. We, however, were not alone. Arkansas and Oklahoma, as well as southern Illinois and parts of Kentucky also suffered from record high water.

I’ll be thinking, praying for, and doing what little I can to help the flood victims here as we recover from yet another major flood. Should you be one of those victims and live here in Missouri, here’s a link to Missouri’s SEMA Assistance Resources page. There’s information there about where to locate assistance as you work through the recovery process.